Apoptosis is a natural and essential process required for growth as well as maintenance of a healthy state. It is most important to understand the working of cancer drugs as well to conduct research in molecular biology.

There are two primary known ways through which the cell receives a signal for apoptosis, external pathway and intrinsic pathway.

There are numerous types of proteins that play a role here as with any other pathway. However here the proteins fall into two major classes. Pro-apoptotic and anti-apoptotic proteins.

In apoptosis, there are two kinds of caspases, initiator caspases (2,8,9,10 caspases) and executioner proteins (3,6,7 caspases).

Once executioner caspases are activated the apoptosis process cannot be halted.

The process of apoptosis begins (extrinsic pathway) with a signal from a ligand, one which FAS ligand and TNF alpha are best examples. These bind to their respective receptors and initiate an apoptosis signalling cascade.

These death domains go on to activate and convert procaspase 8 and 10 into active caspases. When activated caspase 8 and 10 form a death-inducing signalling complex (DISC).

DISC goes on to activate other procaspases and to caspase state. It also activates other pro-apoptotic proteins that allow the mitochondrial membrane to lose its integrity.

DISC formation allows BID and BAX to form pores in the mitochondrial membrane.

Whereas other proteins such as BAD and BID will go on to counteract BCL family of anti-apoptotic proteins. 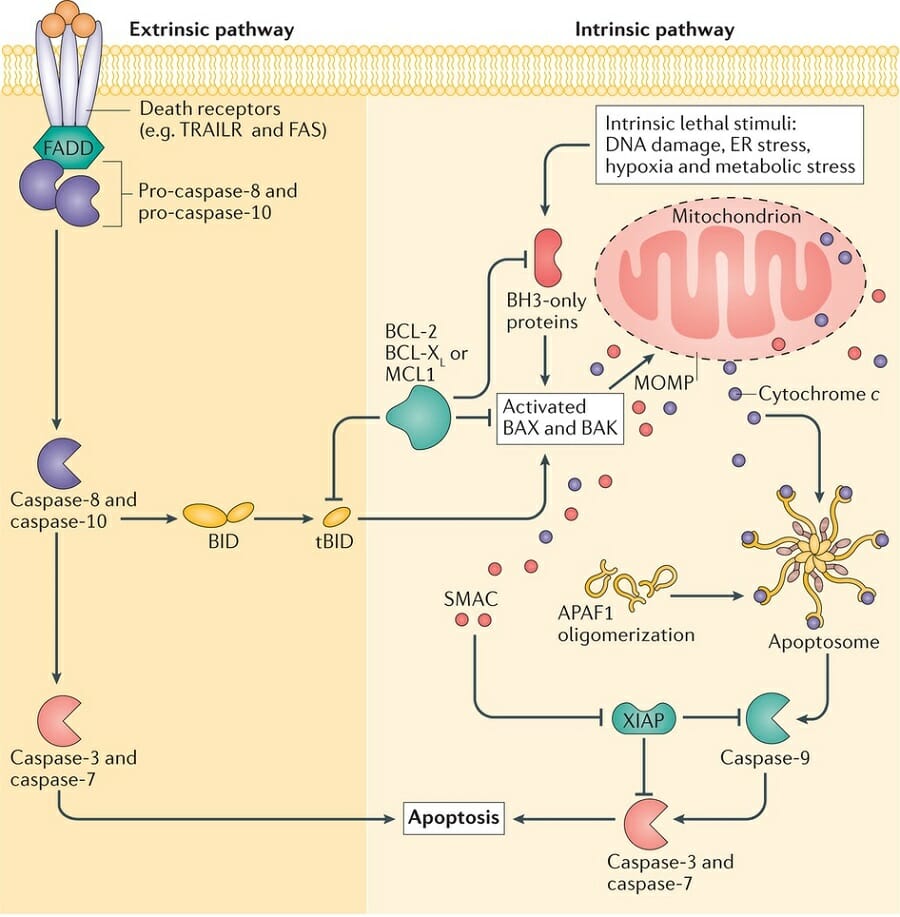 When the mitochondrial integrity is lost it is referred to as MOMP (Mitochondrial outer membrane permeabilization). It will cause the mitochondria to leak out a protein called cytochrome C. which when combined with apoptotic protease activating factor (APAF-1) will form an apoptosome. The apoptosome will the go on to degrade proteins of the cell and activate other caspases also.

The intrinsic pathway involves an initiatory signal from damaged genes of the cell. When the repair mechanisms fail it will cause the activation of P53 and thus BIM protein.

BIM activates BAK whereas other proteins such as PUMA, BAD, NOXA will inhibit the BCL family of antiapoptotic proteins.

From that point onwards the remainder of the process is common for both intrinsic and extrinsic pathway. The mitochondrial membrane integrity is lost cytochrome C is released, apoptosome forms.